There are so many different flower names which we all love. But my big question is 'Where did all the flowers come from?'

Flower names are important for many reasons. They help us identify flowers uniquely and make them stand out from all the others. I hope you will find some of your favourite flower names here and that during your visit you find out something about the amazing world of flowers that you didn't know before.

Just like humans, plants have a common name (our birth name) and a family name (our surname). This makes them unique. Both humans and plants can be further divided many times over to identify them, but their common and botanical names are enough for our purposes here. For example, a beautiful single pink rose (Rubiginosa) is named as follows:

All flowering plants are called Angiosperms, and as you will soon find out, they are all about Sex.

The man responsible for flower names, and the names of all living things ( the Binomial System - two names) was Carolus Linnaeus. And he used Latin. He classified living things according to similarities. You will see quite a lot about the Briar Rose (Wild Rose) on this site because it is where all our roses of today came from. It wasn't until humans intervened that a single rose (with five petals) was transformed into a semi-double, a double, and even a Centifolia (with 100 petals or more).

Unfortunately, to many gardeners, the original single rose has become a pest because it has a habit of reverting to its wild form if left unchecked and may become an invasive species. However, nowadays we need not worry about that problem because of new plant breeding techniques. The old has been replaced by the new, in this case Cultivars and Hybrids, and we have some very beautiful single roses which will not get out of hand at all.

Do you have a flower garden of your very own? If so, I envy you. I have had many flower gardens in my life, but I can't have one right now. This has really been getting to me, so I started buying online flowers in the form of jewellery. Nothing expensive, just as long as they are were/are real flowers.

When I was searching for wearable flowers I found a lovely lady in Colorado who makes her own wearable gardens from flowers she has picked and dried. She then pours resin over them which magnifies them and they are utterly irresistible. It is an enchanting way of preserving spring forever, especially during the cold winters over there. I live in Queensland, Australia, but I have visited the USA during winter and summer. I just loved the snow, the food and the shopping! I can't wait to go back one day.  (To MN, of course). Photo credit: Gifts For All Seasons.

But that just wasn't enough. I was already building a website totally unrelated to flowers, and one day I just decided that I had to write about flowers. All kinds of flowers. I had left beauty out of my life for a long while prior to this and nobody should do that. So All My Favourite Flower Names was born.

What really triggered the total change in my thinking was the second episode of  'How to Grow a Planet' from the BBC series.  There I saw the evidence of the first-ever flower, and to me that was mind-blowing. It was the ancestor of the Avocado, Persea americana. Before this latest find, the first flower was considered to be the ancestor of the Magnolia. There are, of course, several other contenders for the World's First Flower (Archaeologists are always making new discoveries), but this one is close enough for now. 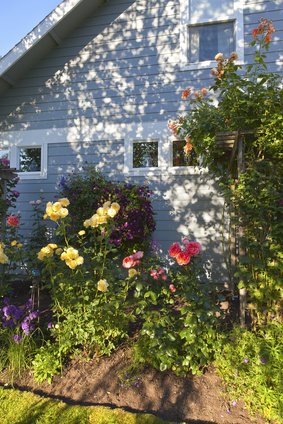 Now for a list of my top ten flower names. I will no doubt be changing this often. I hope some of these are your favourite kinds of flowers too. Update: Actually, after about two years, I find that my top ten favourites list has not changed at all.  That was a surprise! But the names of flowers have always fascinated me. Some are so aptly named, such as the Red Hot Poker plant, while some seem to have got the flower name wrong. However, these are definitely my favourites: 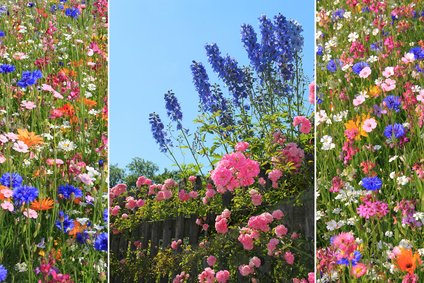 Flowers have a way of getting to us, just like sunsets. Where would we be without them? Well, there was a very long time when the earth was without flowers of any kind. No flower names to add to the Earth's diary, just green everywhere. The first flowers only appeared about 130 million years ago, and they were right in there with the Dinosaurs.

If we look at the Timeline of Earth's history we can put this rare and amazing development of Evolution into perspective. Flowers had arrived, and not only were they beautiful, they were hugely successful and spread over the whole planet (they had 130 million years to evolve into what we see today). They flourished.

But flowers with all their beautiful colours didn't just suddenly appear. As you know, Evolution can be a slow process. But by developing flowers, plants were able to attract pollinators for sexual reproduction. The first flowering plants probably looked a little bit like the Green Rose before they went on to develop the characteristics which we see, smell and love today.

Let's see just exactly where they fitted in:

When Flowers Were Born.

The basic timeline of a 4.6 billion year old Earth, with approximate dates:

If you would like to see the very first bird which has just been found, click here. He's rather beautiful and he is 130.7 million years old. But even though he was born in time to feed from the beautiful flowers which came a few million years later, he probably didn't. He seems to have been a wader and fed from lakes and streams. 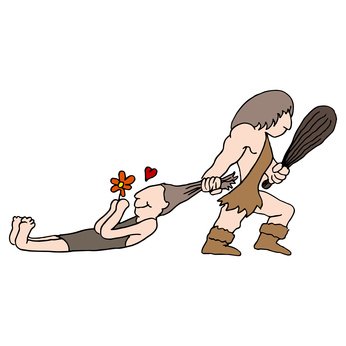 Humans Have Always Said It With Flowers.

About Neanderthals: It is now thought that they may have died out not from conflict with Homo sapiens (us), but because their environment changed and they could not adapt in time. At the end of the last Ice Age, as global warming replaced the bitter cold, Neanderthals could not adapt to the changing conditions. It is thought that this contributed to their demise. (But ... it seems that they did interbreed with humans!)

They were actually built for the cold with large noses to warm the air before it entered their lungs, and short, stocky bodies which prevented loss of body heat. A cave in southern Spain seems to have been one of the last signs of their presence on the planet, as well as one on the western coast of Wales. But as with all science, new discoveries are always being made and new theories are continually evolving.

Nature's first upright stem which led to all upright plants and trees.

So Where Did 'We' Come From?

We are all descended from the first living things, the blue-green algae, but after that life branched out in many different directions, so that we are cousins to the flowers. It has been found that the Neanderthals probably buried their dead with flowers. And I think that flower names were already in the vocab of the earliest humans when they were able to speak.

Flower names, however, are officially attributed to modern humans, who have a need to classify everything. There are so many different kinds of flowers on the Planet now that a huge number of them haven't even been found yet. But when you think about how many different unique flowers have already gone extinct, we should be truly grateful for every one we see. As well as being so beautiful to look at, many flowers and plants are useful to us, especially in helping scientists develop ways of treating many illnesses.

As far as the evolution of plants goes, scientists have recently discovered evidence in dinosaur droppings that they were eating grass, something they thought evolved a long time later. And no doubt they would have been nibbling on the flowers as they passed by, and now the evidence is in: First Flower Seeds from Dinosaur Era Discovered Jan. 2016. 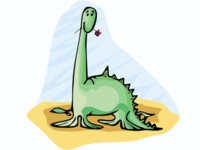 Baby Dinosaur with a Flower.

Another interesting thing about the dinosaurs (who were mainly vegetarians) is that many of them were so long and so tall that the trees had to grow taller to escape being eaten. And they did it.

The Sequoia trees reached amazing heights. The longest dinosaur ever was Supersaurus (about 34 metres) and a descendant of these massive Sequoias, the General Sherman, is over 80 metres high. Huge! The T Rex was a baby, at only 12 metres long. Also worthy of a mention is the Blue Whale of today who is about 30 metres or longer and could fit several T Rex's, a couple of hippos, and many other large things inside him. His heart alone is the size of a small car. He is as long as three school buses.

A Bit Too Close For Comfort?

"On one clear day 65 million years ago, the sky suddenly fell in, and 80% of all life became extinct. But this cataclysm also opened the door for humans to inherit the Earth". Cosmos Magazine.

The names we have given flowers today are fascinating, and it's not until you really start trying to identify flowers that you realize just how handy these unique labels are. On the following pages, find out about the different types of flowers we are left with (noting that some of them, obviously, survived that Mass Extinction). So did some of the Flying Dinosaurs which evolved into our birds. Find out just how close we all came to Extinction:﻿ K/T Extinction. A very close call.﻿

And we are descended from the small mammals who also survived the event. That Asteroid really did us a big favour .... Can you imagine Cavemen surviving against the T Rex? We are actually very lucky to have any flowers at all, considering  that the Asteroid wiped out most of all life on earth. Note: This explanation for the Extinction of the Dinosaurs is only one of several theories but it's the most likely one.

Go to Types of Flowers.

Parts of a Flower.

Flowers A to Z.