Heirloom Roses Are Very Old But Not So Hard To Find. Heirloom Roses, also known as Antique Roses, are defined as any roses belonging to a class of old roses which existed before the introduction of the first Modern Rose, 'la France', in 1867 (see photo above). Alternative terms for this group include heritage, historic, old roses, antique and old garden roses.

They are all the same, although some experts refer to all old roses as being those roses which are 100 years old or more. That is fine for now, but in 50 years time, there may be a problem. So I go for 1867 as the cut off point. The term 'cultivar' simply means a cultivated product of a variety (wild) rose or a cultivated variety rose.

The original heirloom roses came from Europe or the Mediterranean. They only bloom once in a season but they are worth having in your garden because of their fragrance and the fact that they have more petals than the old species or wild roses which only have five petals. Also they are tough and relatively disease free. On the downside, they will only bloom on stems from the previous years.

However, when the China and Tea Roses came from Asia about 1800, they were cross-bred (hybridized) so that they would bloom on any new growth, not just on the old stems (or canes) and most importantly, they would quite often flower more than just the once, spreading their flowering season from Spring through Summer and even into Autumn. Roses which do this were and are the ultimate in the rose world, especially if they are fragrant. These roses were ideal to breed from.

All roses can be classified into three main types:  Wild or Single Roses,﻿ Old or Heirloom Roses  and Modern Roses. The wild roses are in a class of their own, but the old roses and the modern rose types are further divided into different groups according to their parentage (even if this is a bit vague). The following groups I have sorted according to their age, which I think is very important, considering just how long they have been around.

Most of the Heirloom Roses or Antique Roses are classified into one of the following groups. The Modern Roses alongside give us some perspective of where they all fit: 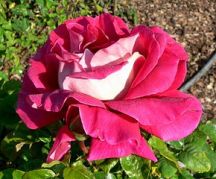 All of the heirloom roses and modern roses can be considered to be cultivars (cultivated variety or wild roses), meaning that humans have intervened to improve them because the only truly ancient (or pure) roses are the single or wild types.

Cultivars are obtained by propagation - such as grafting, cuttings, etc. Growing by seeds (rose hips) alone is not a good idea because the new plants are the same as the parent.

Another modern technique for getting better quality roses is using genetics. 'Cultigens' means the plants have been bred using genetic techniques. All aiming for that one perfect flower, in this case, a rose.

Sometimes nature does it for us. For example, 'Flaming Peace' is a beautiful 'sport' of the 'Peace' Rose. 'Sports' tend to appear out of nowhere as a different form and or colour on the parent bush. This could happen to you or me. Imagine finding just one bloom on your rose bush which has never been seen before. The Holy Grail! It happens on other plants, too. And my family gardening history mentions just enough examples (not roses) for me to believe this is possible. Photo Credit. The Gallicas are the oldest of all the heirloom or old garden roses (arising from the species or wild roses) and they date back to before 1400 AD. They are native to Europe, Turkey and Asia. They are doubles or semi-doubles, but can be singles. They may be pink or deep purple and white (which is rare for Gallicas).

The Gallica rose or 'Rose of Provins' is very old. It is derived from Rosa gallica. The Apothecary's Rose (Rosa galllica officilanis - above) is an example. It was once used by Apothecaries as a medicine. They only flower once in Summer, but they are colourful, ranging from pink and red through to deep crimson/purple. These heirloom roses are so old and so beautiful, it's no wonder we still want them in our gardens. They are also very resistant to cold which makes them very popular.

Alba roses come from R. arvensis and R. x alba. They are literally "white roses", derived from R. arvensis and the closely allied R. x alba. Once again we see R. gallica and R. canina which were mentioned on the Single Rose' page. R. x alba is a hybrid of R. gallica and R. canina (the Dog Rose). This group (alba) contains some of the very oldest heirloom roses. They flower only once in spring or summer and are fragrant. They may be white or pale pink and some have beautiful grey-green leaves and are vigorous climbers. They certainly meet all my requirements, especially after looking at the photograph (above).

The beautiful Damask Rose 'Celsiana' before 1732.

Damask roses are named after the city of Damascus in Syria. Damask roses are a cross between Rosa gallica and Rosa moschata. Another heirloom rose shares in their parentage and gives them the repeat blooming - Rosa fedtschenkoana - as it is one of the only repeat-flowering wild roses.

Centifolias or Roses of Provence.

Centifolia roses are Antique Roses, also known as Cabbage roses, or Provence roses. They are derived from Rosa x centifolia, raised in the 17th century in the Netherlands. They are named for their "one hundred" petals; they are often called "cabbage" roses due to the globular shape of the flowers. The result of damask roses crossed with albas, the centifolias are all once-flowering. As a class, they are notable for their inclination to produce mutations of various sizes and forms, including moss roses and some of the first miniature roses.

The Moss roses are based on a mutation of Rosa centifolia, the Provence or cabbage rose, some with Damask roses as another parent. Moss roses with Centifolia background are once-flowering, but some moss roses do repeat flower from their Autumn Damask parentage. Examples are the 'Common Moss' (centifolia-moss) and 'Mousseline', also known as 'Alfred de Dalmas' (Autumn Damask moss).

The Portland roses come from the Autumn Damask and Gallica roses. Their parents are said to be 'Autumn Damask' and 'Slater's Crimson'. They were named after the Duchess of Portland. In 1775 she was given a rose called the 'Scarlet Four Seasons' Rose. All the Portlands come from that one rose. Naturally it is repeat-flowering in Summer and into Autumn. Examples of today's Portlands are 'James Veitch', 'Rose de Rescht' and 'Comte de Chambord'. The Portland roses are singles or doubles and tend to be short and shrubby.

But they are appealing because of their unique longer flowering period.  However, their numbers are declining as they go out of fashion. There were once well over one hundred different Portland Antique Roses, but today at Kew Gardens, there are very few. An interesting fact about the Portland roses is that there are no climbing forms.

Order and Classification of Roses adapted from Wikipedia under the following ﻿License.﻿

Continue on to Old Garden Roses.

Home. Return from Heirloom Roses to Types of Roses.

“The rose speaks of love silently, in a language known only to the heart.” -Anonymous