Hollyhocks. So Tall And Stylish. Easy To Grow And Care For.

Up Against a Garden Wall.

Hollyhocks belong to the Alcea family which has about 60 species. They are in the Malvaceae or mallow group, of which there are about 2,300 species, including the Hibiscus.

They are often confused with the Hibiscus or Rose of Sharon and you can see the resemblance in their flowers, but their leaves are distinctively different. They are actually biennials, along with the Foxgloves, but we can also treat them as annuals and even perennials because they self seed.  They are available in singles, semi-doubles and doubles.

They originally came from Western Asia with a few from Europe and Egypt, so they can tolerate drought, but they do prefer regular watering to keep the soil moist. But not too much. Like roses, they don't like wet feet.  They are related to cotton, okra and cacao. Even the Hibiscus is in this group with about 300 types. If you study some pictures of the single species, you can see that  they are so much like the hibiscus plant.  It's quite evident in the picture above.

Hollyhocks are Biennials, but I love the fact that they are annuals in some cases eg. Zebrina, because you get the chance to choose new ones every year or so. 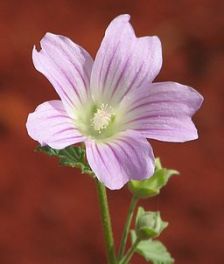 They grow up to 9 feet in height or even more so they do better at the back of a garden against a wall or fence or attached to stakes so they don't topple over in the wind. And they can have up to 2 feet of blooms on each stem. I have seen them grown in an average garden and they certainly are very tall.

They have round leaves with little points on them and lots of flowers on the central stem. The wild varieties come in pink or yellow but there are, of course, many hybrids. It is thought that the Neanderthals may have used them when burying their dead.

The best time to plant them is in the autumn. That way you should get blooms in the following summer through to autumn.  They may also be planted in the spring. They need: 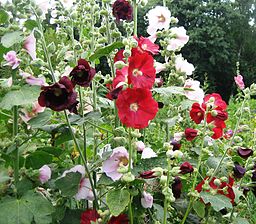 The best known species are: 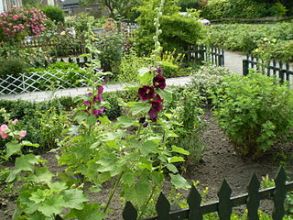 In a front garden.

Find out exactly how to grow Hollyhocks step by step.

These stunning plants are very drought resistant, and do well in full sun locations that might be too hot or dry for other plants. They love the sun, so plant them where they will get 6 hours of sunlight a day.

Their seeds are large and round and grow where they drop. If you want to transplant an established plant it could be difficult as it has a very long tap root system. It would have to be gently teased and lifted.

Traditionally they have been used as natural herbs, but as with all these types of herbs (like the Foxglove - digitalis - care must be taken not to consume them). They are prone to flea beetles which should be picked off regularly, cutworms, aphids and capsid bugs. They are also susceptible to hollyhock rust. All these problems can be avoided with a good quality organic spray. 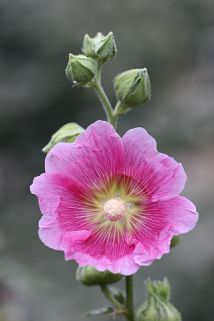 Hollyhock rust and how to deal with it.

The best way to prevent the rust (which is a unique fungus that only affects Hollyhocks) is to keep them aerated - plenty of room for air to circulate around them rather than having them all crowded in together. Also it is vital to water only the base of these beautiful plants, and to remove any signs of disease when you see it. Always wrap it up well and put it in the bin. If rusted parts are left on the plant during the winter they produce spores which keep the rust alive.

It's the same thing as getting rid of Black Spot on roses - never let the affected  leaves near another rose plant. I collect mine carefully and they go straight in the bin. I brought home a small rose one day which looked great when I found it. But it had a fungus, and although it was doing well, it quickly spread to my other nearby roses. That was when I really started to take care and do the right thing. Always keep susceptible plants dry with plenty of air around them.

The following site has some wonderful advice about Hollyhocks in general, not just for rust:

"As for marigolds, poppies, hollyhocks, and valorous sunflowers, we shall never have a garden without them, both for their own sake, and for the sake of old-fashioned folks, who used to love them.”