Hybrid roses are roses which have been cross-bred or bred by special plant breeding techniques based on the old China Roses. 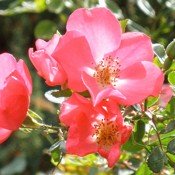 Hybrid Roses are simply roses which are the result of cross-breeding between two similar parents. The very first rose which seems to have started rose hybridization and got it going, was Rosa chinensis.

The majority of ornamental roses are Hybrids that were bred for their flowers. A few, mostly species roses, are grown for their attractive or scented foliage (such as Rosa glauca and Rosa rubiginosa), ornamental thorns (such as Rosa sericea) or for their showy fruit (such as Rosa moyesii). See Images of Rosa gigantea.

Hybrids can be created naturally from Species (Wild) roses, or by direct human intervention. If you would like to see exactly how roses are cross-bred, or maybe you want to try it for yourself, it's easy. Just check out this website which shows you the step by step process.

Roses belong to the genus Rosa, and their family name is Rosaceae which has around 100 members. I have dealt with the very earliest roses on the Old Garden Roses page, so now let's branch out a bit for another little piece of history.

Just about all the roses we see today are Hybrids dating back to Rosa Chinensis. Each one has a parentage which can (hopefully) be identified. On this page I hope to gather some of the loveliest of these very old hybrid roses into one picture gallery, along with their parents. This rose came from a cross between: 'Merveille de Lyon' (a hybrid Perpetual) and 'Madame Caroline Testout', a Hybrid Tea. Hybrid Musk Roses were created by John Pemberton (1853 - 1926). He was a clergyman and after his retirement, he began to breed roses. He used the climbing rose 'Trier' and he crossed it with Hybrid Teas to produce highly fragrant roses with 'clusters' of buds.

He first called these roses Hybrid Teas but later changed that to 'Hybrid Musks' because of a link between 'Trier' and 'Moschata' (the Musk Roses). 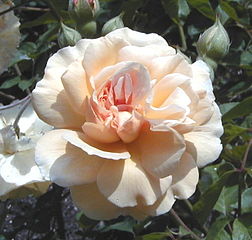 Other Hybrid Musks by Pemberton are:

The next generation of Hybrid Roses were the Hybrid Tea Roses.

Occasionally you may come across a lucky find: the 'sport' of a certain rose. An example right here is Rosa 'Bicolor atropurpurea', before 1590, which is a sport of Rosa foetida. The following two photos are of two different types of Rosa foetida: the yellow and the orange. The third image is a 'sport' of either one (Uncertain which one, but it may be the orange). We had a sport on a Red Camellia bush once, it was just one flower which was striped on a bush which with plain pink flowers. So we took it off and grew a whole new bush (as a cutting).

A 'sport' can form on the same rose bush because of environmental problems such as radiation and exposure to certain chemicals, but it can also happen as a chance mutation - an error in the genetic code of the parent bush. As you can see, it can lead to a completely new species of rose, if the environmental conditions are just right. And this is how random mutations occur in all species in Nature - Natural Selection in progress before our very eyes. Home. Return from Hybrid Roses to Types of Roses.

"The optimist sees the rose and not its thorns; the pessimist stares at the thorns, oblivious to the rose". - Kahlil Gibran