The First Hybrid Tea Roses Were a Cross Between the Hybrid Perpetuals and the Tea Roses. 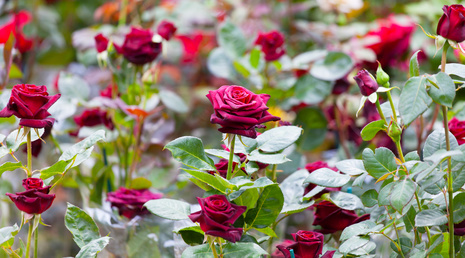 Hybrid Tea Roses were first bred by crossing hybrid perpetuals with Tea Roses. The hybrid teas are considered to be the oldest of the Modern Roses which we see today.

They are hardier than the tea roses, but not as hardy as the hybrid perpetuals, however, they are more likely to flower often even if not quite as often as the tea roses do. So they are a mixture of both worlds. A blend of toughness and repeat flowering.

To sum it up: the hybrid perpetuals are tough but do not bloom often enough, and the tea roses are more fragile but bloom more often. The Hybrid Teas combine both qualities. This rose was developed in 1900 by Joseph Pernet. It was certainly a real breakthrough. It combined the hardiness of the Hybrid Perpetuals with the repeat-blooming habit and colours of the Tea Roses. When he married Marie Ducher, who was the daughter of another famous rose breeder, he combined the two surnames, to Pernet-Ducher, in honour of both the families. Pernet-Ducher lost both of his sons in World War 1, and developed a rose for each of them: 'Souvenir de Claudius Pernet', a hybrid tea, in 1920, and 'Souvenir de Georges Pernet' - (Pernetiana rose) in 1921. But it was the hybrid 'Peace' Rose ('Madame A. Meilland') which was the first rose to really put the hybrid teas on the map. Developed by Francis Meilland between 1935 and 1939, it was named the 'Peace Rose' at the end of the Second World War. It is a descendant of 'Soleil d'Or'. 'Peace'. It still remains the most popular rose ever. It has flowers the size of a saucer. (About 6"). For advice and care of Hybrid Tea Roses, you will find this site excellent:

Caring for your Hybrid Tea Rose.

The Following Pictures of Hybrid Tea Roses Are Just Some of My Many Favourites. 'Ballet' was introduced in 1957. This beautiful rose is a parent of the 'Peace' Rose and is just as easy to grow as are a lot of the hybrid teas. It has beautifully formed petals in dark pink, and is highly fragrant. It will grow to about 3 feet and is a repeat flowering rose. Perfect. 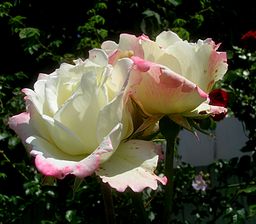 'Double Delight', Swim & Ellis 1977. Highly fragrant.  One of the best known roses in the world. (Rose Hall of Fame). 'Golden Medallion', W. Kordes & Sons (Germany, 1991). This is a vigorous grower with a mild fragrance. Highly dependable and a great exhibition rose. 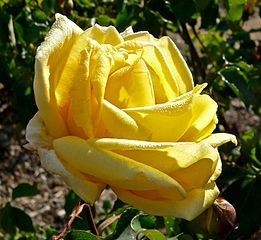 WOW. What a rose! 'Rio Samba', William A. Warriner (United States, 1991). This rose has mild to strong fragrance. It is susceptible to some rose diseases, but all of these can be controlled by taking good care of it. Obviously worth an effort.

'Sonia Meilland', Meilland 1970. This rose looks just like silk. It has a medium fragrance. 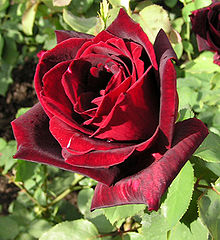 Rosa 'Esmeralda' (Reimer Kordes, 1981). Not to be confused with the Floribunda Rose 'Esmerelda' 1957 by Riethmuller. 'Gather ye rosebuds while ye may,

And this same flower that smiles today,