Iris Flowers. Queening It Over The Perennials. 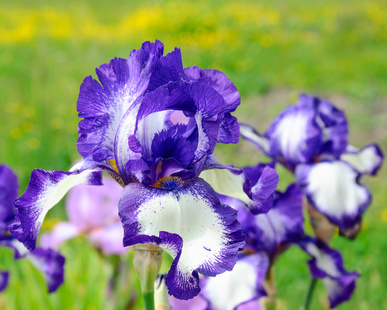 Iris Flowers. No wonder their name means 'Rainbow', because that's just what they are. Rainbows of exquisite colourings to which more are added each year. But like the true 'blue' rose, the true 'red'  iris has eluded us so far. However there are plenty of others to choose from.

They are really perennials which we sometimes call annuals because they only flower once a year,  and they may be either rhizomes or bulbs. This means they have an underground storage system which keeps them alive and feeds them while they are dormant during the winter. The rhizomes spread horizontally underground and these types are called 'Creeping'.  The bulbous ones grow in clumps, just like any other bulb.

They belong to the Iridaceae family which contains some of the showiest plants on the planet. It is possible to become addicted to iris flowers - they are so intricately and exquisitely formed. They are natives of the northern hemisphere and love cold and temperate climates, especially mountains, and also even dwell along river banks. They are a delightful woodland flower too. And we can easily grow them in our own backyards. It does not take an expert to grow an iris!

Being perennial flowers means they can give several to many years of showy flowers in spring through to late summer. But they should be divided at the end of each season or they become very clumpy, competing for space. They love full sun to part shade depending on the type.

The flowers have six lobes - three petals and three sepals (which protect the flower before it opens out). The lobes are often veined, lined or dotted.  The petals stand upright and are also called 'standards'. On the bearded iris are small 'hairs' growing down one or more petals. 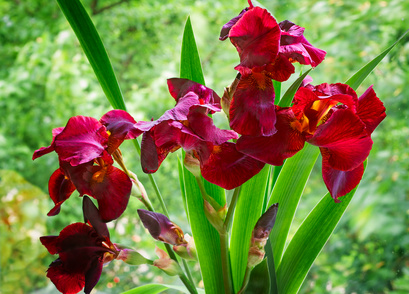 As Close To Red As It Gets.

There are three main types: Bearded (with hairs),  Beardless (no hairs) and Crested ( a little crest comes out of its petals - see image below). The bearded ones flower first and then the beardless come next. If you know this, you can plan where to put them. The crested irises flower in May. Even though their bloom time may only last a few to six weeks, it's well worth the wait each year for any type.

There are many different hybrids and cultivars but most are based on the beardless Copper iris (I. fulva) and they are mostly the full range of the spectrum or rainbow: redd-ish; yellow; orange; blue; purple and white.

If you want an Iris which is a bit different, I cannot recommend anything better or sweeter than the Blackberry Lily. I only just came across this name which is new to me. However, I immediately recognized one of the names it goes by: the Leopard Lily. All these years I have thought of this as a member of the Lily family, but it's not. It's an Iris. Its correct botanical name is Iris domestica.

I grew Leopard Lilies (Blackberry Lilies) once with great success in a garden whose soil was almost solid clay. It survived the soil, the heat and a great amount of neglect. It was in a hot corner against bricks, where it did get a little bit of drainage, but it just kept on spreading. Its flowers just reached window height and I loved it, having rescued it from a root bound pot in a nursery. I can see now where it gets its name, Blackberry Lily. After flowering, this remarkable Iris flower produces large amounts of black berry-like seeds.

Having discovered this, I naturally assumed that the Tiger Lily was also from another species and must be related to the Leopard Lily. However, the Tiger Lily is a true Lily member.

And just to confuse me even more, there is a Leopard Lily which is actually a true Lily. It's called Lilium pardalinum, but it is not the Leopard Lily that I once grew.

Mixed in a layered garden. 'Samurai Warrior'. The closest to red yet.

The Crested Iris 'Graminea'. You can see the three petals (striped), the three sepals (plain) and above those three little crests. This makes it look as if it had nine petals, but it hasn't.

Beardless with attractive companions. This has naturalized or gone wild.

Beardless in a garden in Madrid.

"Thou art the Iris, fair among the fairest,

Who, armed with golden rod

And winged with the celestial azure, bearest

The message of some God."