Knock Out Roses. The Find Of The 21st Century. 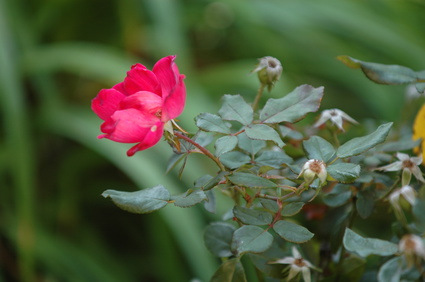 The Pink Knock Out Rose.

Knock Out Roses are tough, vigorous easy to care for and bloom right through from Summer to Autumn. And they do not need dead heading. They just drop their spent blooms onto the ground, recycling at its best. They 'make their own compost' at their feet! Because they don't need dead heading, which means the spent blooms don't stay on the bush, they don't go on to produce hips.

So if you want to make rosehip jam or jelly, you'll have to look elsewhere. But, this means that they put all their growth into making blooms by themselves, and as their petals fall they simply make new ones. There are several other roses which do this, actually, such as 'Pink Simplicity', 'Flower Carpet' rose and 'Topaz Jewl', a Rugosa Rose.

Basically, you can buy them, plant them in fresh soil, or at least in soil which has been well turned and composted, and that's that. But, as I saw on an episode of 'Rosemary and Thyme' (who are female landscape gardeners and amateur detectives), roses don't like being planted in any soil which has been the former home of other roses. They can actually die from anything left behind by former occupants, such as chemicals, diseases, waste products from the old ones, and your new roses could become very sick indeed.

In the episode I saw, the solution was to bring in a back hoe. But the reality for most of us has to be a bit of labour with a shovel, digging down a couple of feet, and replacing the old soil with new, healthy and even composted soil. In my case I would use loads of potting mix.

And their shape is to be envied. Leave plenty of room for them so they can show off their distinguishing 'perfect shrub rose' shape. 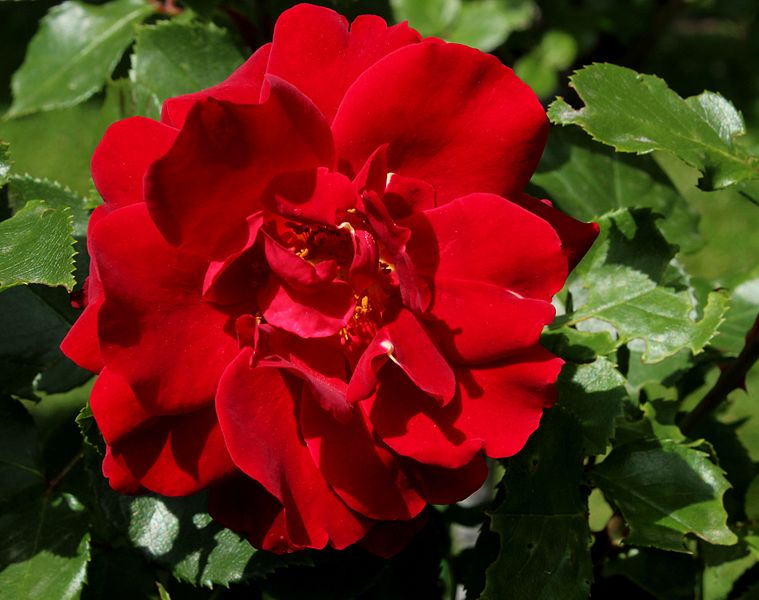 So far this rose has one the following Awards: So where did they come from? This story is so inspiring. A man who followed his dream and helped rose gardeners all over the world have an easier time of it. Read an interview with the man who did it.   William Radler's Dream Come True.

I guess breeding roses is a bit like cooking - you need ingredients. I don't know what these ingredients all mean, but here is the secret recipe which was used to create the Red Rosa Knock Out (straight from Wikipedia).

The Red Knock Out Family Tree. 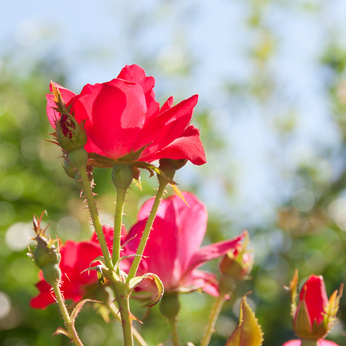 Knock Out Roses have a lovely shape, so if you are planning to add one to your garden to give it plenty of room to show off its beautiful shape. Just like other roses they need plenty of sun, but will certainly tolerate some shade. Their requirements are minimal, being bred with disease resistance in mind.

Not only can they tolerate some shade but these tough rose types can handle drought, and will even survive Winter and cold climates.

Choose Knock Outs if you want something stunning in your garden. They are beautifully shaped bushes, their colours come in pink, white, yellow, a stunning red double, and even a rainbow-coloured shrub. They won't make an excellent specimen for a vase in the house, nor will they have the fragrance you may desire. But if you're like me, I'd love some in my garden, and some in the house as well. I just love the shape of their buds and blooms. They're sure different. The most striking thing I've noticed about them is that they just look so different from the usual rose. Their blooms are a different shape and you can see that the buds are certainly not the usual rosebud shape. They are, to me, absolutely striking. The Red Knock Out Rose.

Just when we thought we'd exhausted all possibilities in rose colour and petal design, along come the Knock Out Roses, and they are just that. A total Knock Out.

Care is minimal, but you may want to prune them if they get a bit straggly. Just use whatever techniques you use for other roses, but don't dwell on it. These roses are tough. 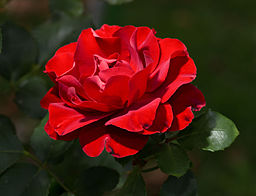 Where Did Knock Out Roses Come From?

Their parents are the 'Carefree Beauty' rose and the 'Razzle Dazzle' rose. Both of these are attractive and hardy. Success was inevitable. It just took somone to think of crossing these two and William Radler did just that. And so far he has come up with seven varieties:

Actually, there has been a new addition to the family: 'Rosa Radsunny'. The only fragrant one. Lovely.

They are all extraordinary, the 'Sunny Knock Out' being the hardiest.

Home. Return from Knock Out Roses to Modern Rose Types.