Old  Garden Roses are in the same class as the Heirloom Roses, the Old Roses and the Antique Roses. Even Heritage Roses mean the same thing: old!  Their names are synonymous.  Old Garden Roses are generally classified as roses which appeared before 1867 (when 'La France' was successfully cultivated - see left).

Continuing on from the Portland roses on the previous page, we have the China, the Tea, the Bourbon and the Noisettes right through to the Bermuda Mystery Roses and other  old roses which are classed all together as 'Miscellaneous'. Once the China roses arrived, breeders virtually had the 'creme de la creme' of roses to experiment with, and they had some amazing results.

The China Roses are descended from Rosa chinensis and have been grown for centuries in East Asia. They came to Europe in the late 1700's. The China Roses were a new kind of rose. And they were very beautiful.  Many modern roses are descended from these old 'Rosa chinensis' breeds. They were less fragrant and less cold tolerant but they could flower repeatedly - which was just the thing European rose growers were looking for - from Summer into late Autumn.

Also, their petals darkened with age, rather than fading. This was also a highly desirable trait. They were the foundation of the Exhibition Roses, according to Graham Thomas, the noted Rosarian. The Bourbon garden roses came from the island of Bourbon (now called Reunion) off the coast of Madagascar in the Indian Ocean. They are a cross between the Autumn damask and the 'Old Blush' China Rose. Both were used as hedges on the island. They are semi-climbing roses which flower repeatedly. They have very glossy leaves and purple-tinted stems. They arrived in France in 1823. Examples are 'Louise Odier', 'Mme. Pierre Oger' and 'Zéphirine Drouhin' (the last example is often classified under climbing or rambling roses). It is an extremely hardy and popular old rose and looks divine if grown over an archway or trellis.

'Madame Alfred Carrière', Schwartz 1879. This rose is so beautiful.

The Noisettes came from a cross between the China Rose, 'Parson's Pink' and Rosa moschata (the Musk Rose). This cross was an ideal vigorous climbing rose with small pink flowers from Spring into Autumn. It was called 'Champney's Pink Cluster' after John Chamney from the USA who developed it. He sent the seedlings to his friend, Philippe de  Noisette, in France, who then sent them to his brother, Louis, who cultivated them and produced 'Blush Noisette' in 1817.

Later, tea roses were introduced into the hybridization process resulting in Tea-Noisettes. I think 'Mme Alfred Carriere' (above) is the most beautiful out of a 'bunch' of these beautiful old roses. It is even in the Rose Hall of Fame.

Hybrid Perpetuals are old garden roses which are important because they (and the Tea roses) eventually became the parents of the Hybrid Tea Roses, the very first of the true modern roses.

Before this, rose growers tried to cross and re-cross Hybrid Chinas, Hybrid Bourbons and Hybrid Noisettes, but consistently failed to achieve the repeat-blooming shown by the Asian roses. However, in 1838, after growers tried crossing these old roses with others of the same type or with the Chinas and Tea roses, they succeeded in producing some offspring which flowered more than once. 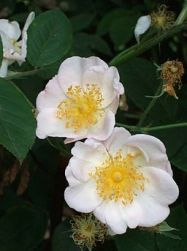 Although they arose too late to qualify technically as Old Garden Roses, the hybrid musks are often informally classed with them, since their growth habits and care are much more like the Old Garden Roses than the Modern Roses. The hybrid musk group was mainly developed by Rev. Joseph Pemberton, a British rosarian, in the first decades of the 20th century, based upon 'Aglaia', a 1896 cross by Peter Lambert. A seedling of this rose, 'Trier', is considered to the foundation of the class. The genetics of the class are somewhat obscure, as some of the parents are unknown. Rose multiflora, however, is known to be one parent, and Rosa moschata (the musk rose) also figures in its heritage, though it is considered to be less important. Hybrid musks are disease-resistant old garden  roses, repeat flowering and generally flower in clusters, with a strong "musk" scent. The stems are weaker than usual and this creates a wonderful arching effect. Examples include 'Buff Beauty' and 'Penelope'. Photo Credit.

Derived from Rosa rugosa from Japan and Korea beginning in the 1880s, these vigorous old garden roses are extremely hardy with excellent disease resistance. Most are extremely fragrant, repeat bloomers with moderately double flat flowers. The defining characteristic of a Hybrid Rugosa rose is its wrinkly leaves, but some hybrids do lack this. Examples include 'Hansa' and 'Roseraie de l'Häy'. These are just about the last of the old roses, apart from the following assorted types. Photo Credit: Kurt Stuber.

This is a group of several dozen old roses grown in Bermuda for at least a century. The roses have significant value and interest for those growing roses in tropical and semi-tropical regions, since they are highly resistant to both nematode damage and the fungal diseases that plague rose culture in hot, humid areas. They are also capable of blooming in hot and humid weather. Most of these roses are thought to be Old Garden Rose cultivars that have otherwise dropped out of cultivation. These old roses are "mystery roses" because their "proper" historical names have been lost. They are named after the owner of the garden where they were rediscovered.

The following site is an unexpected delight. Pictures of the Bermuda Mystery Roses are as  scarce as hen's teeth:

The Portuguese Rambler looks good to me and it does look very much like 'Dorothy Perkins'.

Order and Classification of Roses adapted from Wikipedia under the following Licence.

Gardening With Old Roses. Here you will find the Boursault Roses along with so many others. I own and use this wonderful book with superb photos of Old Garden Roses. Just click on the image.

Home. Return from Old Garden Roses to Types of Roses.

"Those who contemplate the beauty of the earth find reserves of strength that will endure as long as life lasts". - Rachel Carson.