The Peace Rose Has A Special Place In History. The 'Peace Rose, also known as 'Madame Meilland', is without a doubt the most famous rose ever. Why? Because it has such a place in history, and it was a very lucky break for rose breeders and gardeners all around the world.

It is a Hybrid Tea Rose and many millions of plants have been sold since it burst onto the world stage in 1945. It was developed by the French rose breeder, Francis Meilland, between 1935 and 1939 who, when he saw that war with Germany was inevitable, sent cuttings to friends in Italy, Turkey, Germany and the USA. History tells that it was on the very last flight before the German invasion of France. In the USA, the rose breeders Conrad Pyle Co., successfully grew it and thereby kept it safe.

However, because the various recipients of these precious cuttings could not communicate with each other for the duration of the war, it was given several different names. France called it 'Madame A. Meilland' after Meilland's mother. Italy called it 'Goia' (Joy). Germany named it 'Glory Dei' (glory to God) and the USA called it 'Peace'.

And 'Peace' it became known as, when Peace was declared. The official name was announced on the same day as Berlin fell, ending the war in Europe. And 'Peace' has gone on to be a wonderful Ambassador for Peace indeed. In the same year as the war ended, each member of the United Nations (which met in San Francisco) was given a Peace rose with a note which read: "We hope the 'Peace' Rose will influence men's thoughts for everlasting world peace".

In the words of Peter Beale, a noted English rose expert, "'Peace', without doubt, is the finest Hybrid Tea ever raised and it will remain a standard variety forever".  And for me to find out that it also comes in a climbing form, was the icing on the cake.

The Peace Rose is a Hybrid Tea with large flowers of a light yellow to cream color, slightly flushed at the petal edges with crimson-pink. It is hardy and vigorous and relatively resistant to disease, making it popular in gardens as well as in the floral trade. And in our gardens. And now for some pictures and some surprises. Three different images of the 'Peace' Rose showing the delicate colours and the climbing form.

So What, Exactly, Is a Sport?

"What is a sport?

A sport is a term used in horticulture to describe the way some plants grow just one branch or segment which is different from the original plant. Usually the sport has flowers which are differently coloured from those of the original plant. Some sports are recognised and recur (for example particularly in azaleas and camellias), others are seen only once but can be propagated to give a new variety".

Just imagine waking up one day and finding 'Flaming Peace' below, on your 'ordinary old' Peace Rose! Well, that's just what happens if you get lucky (as in 'Lucky Peace' above). This can happen on any plant, anywhere, and if it can be cultivated, by whatever means is available, quite often you have a bit of a goldmine. Many rosarians do all sorts of things with these sports. This article explains what happened with the Iceberg Rose. 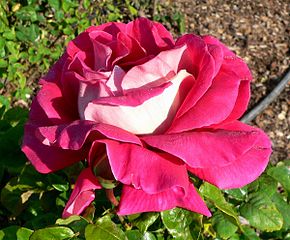 Flaming Peace discovered by Samuel Darragh McGredy IV in 1965. This is also a 'sport' of the Peace rose. Imagine walking into your backyard one day and finding something like this! Lucky Samuel! Photo Credit: Stan Shebs.

Another sport of the Peace Rose. This one is the well-known rose Chicago Peace.

Home. Return from The Peace Rose to Types of Roses.

'When the power of love overcomes the love of power the world will know peace'.