The Pierre de Ronsard Rose. What a Beautiful Creation. 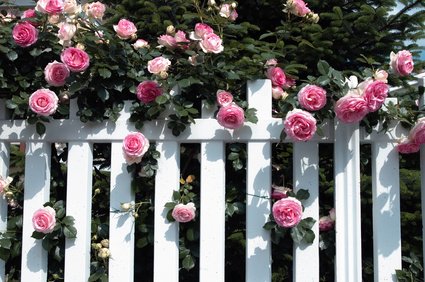 The Pierre de Ronsard Rose beautifully combines the Romance of the old world with the qualities of the new. Meilland has done it again. Also known as 'the Eden Rose' it was introduced in 1985. There is another Meilland 'Eden' rose, but it was developed in 1950. They are easily confused. Its cup-shaped blooms are uniquely shaped and positioned to full effect.

Pierre de Ronsard is part of the Renaissance or Romantica collection developed by Meilland to bring the old world charm to modern roses in France, much as David Austin has done for the English Roses. And this rose is a superb example. It has huge, heavy blooms of pink, fading to white. It comes in three sizes: a shrub rose from 4 to 6 feet; a pillar rose from 6 to 8 feet, and a climber to 12 feet.  Its perfume is medium, and being an award winner it has all the disease resistance and hardiness that goes with these magnificent roses. It was named the World's Favourite Rose in 2006 and was inducted into the Rose Hall of Fame. Roses have to be very special to win this accolade.

And it loves a good pruning. The more you cut back Pierre de Ronsard,  the more vigorously it grows, both in canes and in blooms. It is a fast growing rose which will quickly climb a pillar or onto a trellis or pergola in the first year or at the very least in the second year. It may reach 10 feet by then! 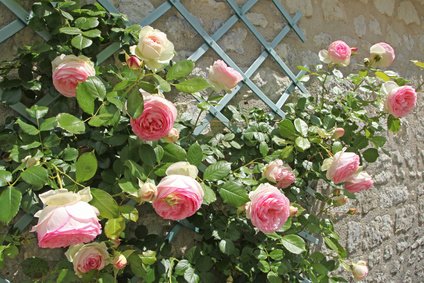 If you prune it hard at the end of winter it will give an amazingly vigorous spring flush and then go on to produce flush after flush of cup-shaped blooms right through and well into autumn.  Once again, it depends where you live. This is a rose which could be trained sideways. If you take a cane and tie it sideways along a fence top, for instance, it will send its shoots and blooms straight up. Now that's nice.

Pierre de Ronsard blooms are heavy and drooping when full and there are generally not many to each stem. The cups are from 3" to 4" across. The perfume is from medium to strong, but not intense. And it smells like a tea rose (just like tea).  The stems are almost thornless and it is an ideal rose to train wherever you want it. You can do just about anything with this rose. As with most roses, it needs frequent watering but it does not like to sit in water for long.

So the soil must be well drained and if in a container, make sure there are pebbles on the bottom and drainage holes in the pot. This rose deserves mulch, a good compost and slow release fertilizer made specially for roses. Don't fertilize it until it is established in its new home if you have just bought it. Give it a month. Then it should be fertilized before flowering time (in spring) and then according to the directions on the packet.

Are there any other Romantica Roses? Yes. You can see them at Regan Nursery.

Pierre de Ronsard is amazingly tough and it is resistant to black spot, powdery mildew and rust. All of the qualities of the award winner. It does not like really hot sun, because it is shade tolerant. But it doesn't like too much of either. It likes the Goldilocks Zone if you have one. And it has a sport. It's called 'Climbing Blushing Pierre de Ronsard'. See it at Treloars.

"And since what comes to-morrow who can say?

Live, pluck the roses of the world to-day".