Rose Pictures. Modern Roses in the Hall of Fame.

The rose pictures on this page are those of the Modern Roses which have been inducted into the Hall of Fame which was created in 1968 by the World Federation of Rose Societies of which there are now 41 member countries. It holds conferences every 3 years and this year's is in South Africa (2011).

The first countries to join were Australia, Belgium, Israel, New Zealand, Romania, South Africa, Great Britain and the USA. To see all of today's participating nations, visit their website, and learn even more: The World Federation of Rose Societies. The Peace Rose.The first Modern Rose to be inducted into the Hall of Fame in 1976.

Find out the history of this special rose right here on its own page.

The Queen Elizabeth Rose is a Floribunda bush rose with mild fragrance. It is a hardy rose and will tolerate a small amount of shade. It is fairly disease resistant and is classed as 'rare'. It has beautiful big blooms and flowers repeatedly in Summer. The flowers are excellent to cut and bring indoors. It has been classified by some as the best pink rose ever developed. Bred by the US breeder Lammerts in 1954 to celebrate Queen Elizabeth's  ascension to the throne in 1952. It has gone out of fashion since the 1980's but maybe this year - her Diamond Jubilee - will bring it back.

'Fragrant Cloud'  is a hybrid tea and has won several awards. It is hardy - does well in the cold - and its fragrance is very strong. It grows to about 4' or 5' and can be bought as a Standard Rose as well. It flowers repeatedly from Summer well into Autumn.

The next rose must be one of the most popular in the world: 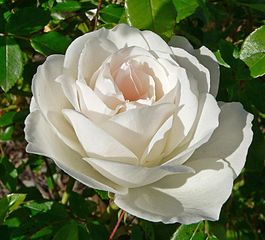 'Iceberg' (Rosa 'Schneewittchen', Kordes 1958) was discovered by the German rose breeder, Reimer Kordes, in 1958. It comes as a shrub rose, a climber, a Standard and a Weeping Standard, as well as other colours. The climbing variety is a 'sport' of the shrub form. It was discovered by B.R. Cant in 1968 (UK). It is a Floribunda Rose, prolific flowering, very hardy, superb as a cut flower with mild fragrance. The kind of rose to be grown in a large pot on either side of a front door (especially the Climbing type). I love it.

It is so good that it was used by David Austin and others as a parent to the following roses:

A hybrid tea rose which is cream, edged with cherry red. (Hybrid Teas were the very first Modern Roses). Very tough and prolific bloomer and highly fragrant, flowering from late Spring, through Summer and into Autumn.  Double Delight now has its own page.

Page 3. Rose Images in the Hall of Fame.

Home. Return from Rose Pictures to Pictures of Roses.

"God gave us our memories so that we might have roses in December". - J. M. Barrie