Modern Rose Types (after 1867) are very special groups which have come from the Old Garden Roses. The very first of the modern rose types is considered to be 'la France' which was bred in 1867. It is a hybrid tea rose. The modern rose varieties of today follow on from the old garden roses or heirloom roses and fit into several distinct groups, which are not as numerous and therefore easier to identify. But because of their ancestry (the old and very old roses) classifying them may become confusing. They are identified by their growth and flowering habits. The following groups include the most popular and most special roses.

Let's put the two groups side by side again for perspective:

With this rose came the fragrance of the heirloom roses, they were hardy and their bloom period was long. They were different. And everyone loved them, with their pointy petals with straight edges.

Another of their claims to fame is the fact that they have a single bloom on each stem. Perfect for a single rose, a cut flowers and a florist's dream. They have been crossed and re-crossed to the limit, leaving us with a huge choice. They are also very easy to care for.  Other famous Hybrid Tea rose types are 'Peace' and 'Double Delight'. See more on the Hybrid Tea Roses page.

Pernetiana Roses were Hybrid Teas but they were special  They were developed by Joseph Pernet-Ducher who had his first success with 'Soleil d'Or' which is recognised as one of the first Hybrid Teas. He was responsible for adding colour to the old pinks, whites and yellows of the old garden roses. His legacy lives on in the myriads of hybrids we see today.

Just finding out what a wonderful job rose growers do, I must say I have tremendous respect for them. To understand just how much patience and skill, but mainly patience, is involved in hybridizing roses, the following site is quite an eye opener. I'm afraid I don't think I could wait three months for a hip to grow, let alone carry out all the other steps; I'm not patient enough, but you never know, one day ...  Something to do when you're really keen to shine. 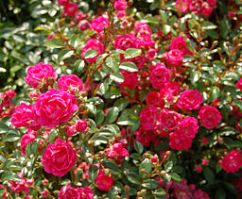 The Lovely Fairy which is a Sport of the original Fairy Rose.

Polyanthas, to me, say lots of blooms and fluffy petals. The 'roses with many flowers' which were bred by crossing 'Rosa chinensis with 'Rosa multifora' in the late 1800s in France. They have small flowers in sprays of pink, white and red. Their main attraction (to me anyway) is their wonderful habit of flowering from Spring right through to Autumn.

They are known for their hardiness and disease resistance and include examples such as 'Cecile Brunner', the 'Fairy', the 'Pink Fairy' and even the 'Red Fairy' also known as the 'Lovely Fairy'. Out of all of these, my choice would have to be The Fairy Rose. Spectacular blooms for a very long period. The world's favourite Floribunda Rose 'Iceberg'. It also comes in a climbing form. The modern Floribundas were created by crossing Polyanthas with Hybrid Teas. It's fascinating to trace the history of the cultivated rose types, continually mixing and re-mixing, and occasionally getting lucky with a 'sport' (where just one flower on any rose bush - or any plant - is different). If it breeds well with some TLC, it will become a brand new type.

In the case of the Floribundas the breeders were looking for the profuse blooming of the Polyanthas with the beauty and colours of the Hybrid Teas. And they got it, with the Poulsen Roses in 1907, the first of which was named 'Rodhatte'. So many others followed, such as 'Iceberg', and the beautiful 'Anne Harkness'. Read about the beautiful Bonica Rose, a multi-award winning Floribunda.  Another two stunning Floribunda Roses are Joseph's Coat and Westerland. Continue to Modern Garden Roses from the Grandifloras Onwards.

'Man is harder than iron, stronger than stone and more fragile than a rose'. - Turkish Proverb