The First Tea Roses Smelled Like Tea and Came From the Orient. 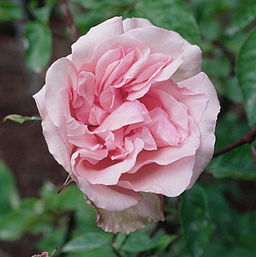 The first Tea roses (R. odorata) were actually 'tea-scented', smelling like black China tea, and were thought to be Oriental cultivars  - a cross between Rosa chinensis (China Roses) and Rosa gigantea, a large climbing yellow rose from Asia with pale yellow blossoms, before 1810.  Cultivars simply means that humans had a hand in their cultivation (Cultivated Varieties).

When they were first introduced to Europe in the early 1800's, they were crossed with more China roses and then Bourbons and Noisettes. They are repeat-flowering (hence their popularity) and their colours range from white, pale pink, yellow and apricot.

Their stems or canes are weaker giving them a lovely weeping, nodding habit. Their petals open out in a spiral pattern, and tend to roll back at the edges with a pointed tip.

They are not tolerant of cold, and this is one reason that they have been crossed and re-crossed with hardier roses since their arrival. But they have other good qualities which is why their descendants are so high in demand.

It is thought that 'Gloire de Dijon' came from a cross between the following two roses: 'Desprez à Fleur Jaune' and 'Souvenir de la Malmaison', but this is questionable. 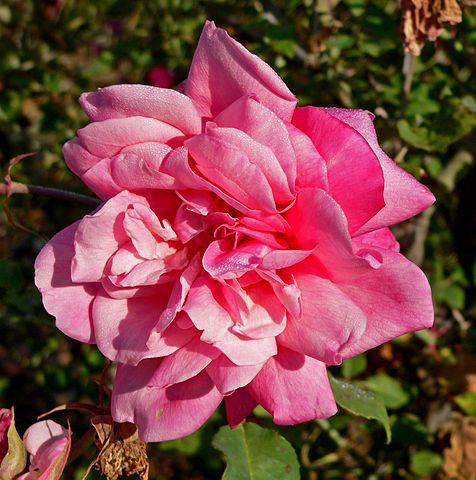 'Parks Yellow China', 1824, above. This shows the unmistakable pointed tips of the Old Teas, above.

Rosa 'Rival de Paestum', Jean Béluze (France, 1841). I love the disarray of this white beauty. It looks as if it has just been 'thrown together' at the last minute, and yet it is perfect, above. 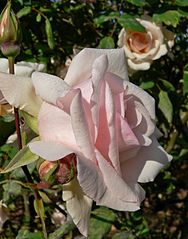 Home. Return from Tea Roses to Types of Roses.

'Man is harder than iron, stronger than stone and more fragile than a rose'. - Turkish