The Wild Rose Flower Was The Ancestor Of All The Roses We See Today. 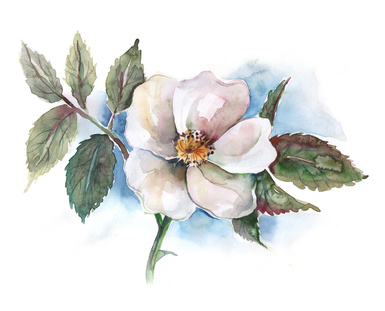 The Wild Rose Flower or Species Rose is a single rose which evolved about 70 million years ago (the far distant ancestor of the single rose of today - and all the others) and it was flourishing before the Dinosaurs perished.

Images of wild roses were even found in the Pyramids of ancient Egypt. They gradually spread across the early civilized world. They were considered very valuable for medicinal properties. eg. the rosehips contain mega doses of Vitamin C. All the modern roses of today come from these gorgeous single beauties.

The first of my favourite wild rose flowers is Rosa rubiginosa, (Sweet Briar, Briar rose, Wild rose) but it is considered a pest in many countries especially in Victoria and New Zealand as it is very invasive. In the Middle East apparently it is dug up after harvesting the crops and is used for fuel. Its leaves are very sweet-smelling, especially when it rains, and it makes the perfect hedge. Its size is roughly 2.4 metres high and 2.4 metres wide (about 8 feet x 8 feet). A native to many parts of the world, it has cup-shaped petals which are usually pink. 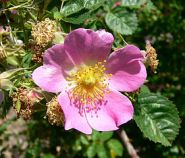 What Exactly Is A Rose?

"A rose is a woody perennial of the genus Rosa, within the family Rosaceae. There are over 100 species. They form a group of erect shrubs, and climbing or trailing plants, with stems that are often armed with sharp prickles. Flowers are large and showy, in colours ranging from white through yellows and reds. Most species are native to Asia, with smaller numbers native to Europe, North America, and northwest Africa. Species, cultivars and hybrids are all widely grown for their beauty and fragrance. Rose plants range in size from compact, miniature roses, to climbers that can reach 7 meters in height. Different species hybridize easily, and this has been used in the development of the wide range of garden roses". From Wikipedia. We all know that, but it does help to get back to basics sometimes.

Briar Roses are the original root stock onto which newer roses were grafted to make them hardy. Briar roses are very tough, and as we know can become a pest. If a newer rose is not looked after it can revert to the old root stock underneath over time onto which it was grafted. I saw my first example of this in the garden of a very old house (about 100 years). The garden had been let go and I found my first true wild rose which had taken over. That's when I fell in love with the single roses, wild or not. Photo Credit: Stan Shebs. 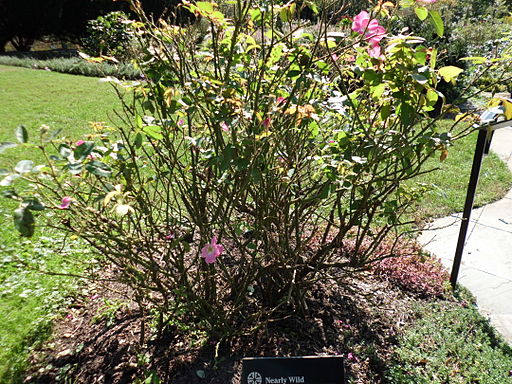 Unfortunately for the wild rose flowers of today, they have a down side: they only bloom for a very short period each year. But now there is a perfect substitute called the 'Nearly Wild' rose (above) which was introduced in 1941 by Dr. Walter D. Brownell to satisfy those of us who love the wild rose but want a longer flowering period. It is actually a Floribunda rose but it has clusters of five blooms, each of which is a single. It comes from Rosa Dr. Van Fleet which was developed in 1910 and is a relative of the gorgeous 'New Dawn' Rose.   See Dr. Van Fleet right here.

Another of the wild roses (see below) is the Dog rose: Rosa canina. That name has always fascinated me. It is actually a climbing rose and is native to Europe, Northwest Africa, and Western Asia. It's deciduous and grows up to 5 metres tall but can actually grow higher in the right tree. Its colour varies from pale pink to deep pink or white.

As single roses go, this is a beauty. It has different meanings in different countries, but in England it is thought that it helped patients with Rabies from dog bites because of its high Vitamin C levels. (It is also linked with the dogberry and witches' briar). Unfortunately it, too, is considered an invasive species, especially in New Zealand. However,  it was used extensively as grafting stock in the early days of the old world roses. 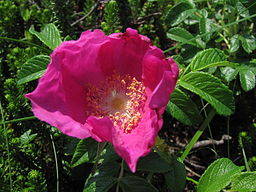 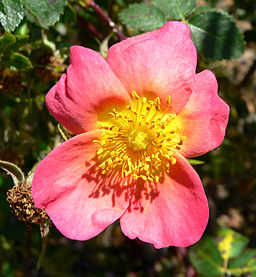 This page would not be complete with mentioning The Apothecary's Rose. The Apothecary's Rose - Rosa gallica officinalis, is the direct ancestor of all the Rosa Gallica species. Originally a wild rose, it is a semi-double, with more than five petals. As with the other single roses - at least the wild ones - it can be a pest because it suckers and spreads rapidly (invasive), but if kept under control it is another beauty. It is recorded as having been growwn as early as 1240 A.D. or even earlier.

This type of wild rose flower with semi-double deep pink petals may be a variety (R. gallica var. officinalis) or a cultivar (R. gallica 'Officinalis') - as above.

In 2004, an old cultivar of the Gallica Group named 'Cardinal de Richelieu' was used as a starting point for genetic engineering to produce the first blue rose. Photo credit: Stan Shebs.

Rosa Xanthinia. (Canary Bird). This gorgeous rose is a hybrid of Xanthina.

Home. Return from the Wild Rose Flower to Types of Roses.

"Love is much like a wild rose, beautiful and calm, but willing to draw blood in its defense". Mark Overby.